FORATOM, the trade association representing the European nuclear industry, welcomes the announcement by EDF Energy on a Strategic Investment Agreement with the China General Nuclear Power Corporation (CGN) for joint investment in two new nuclear reactors at Hinkley Point in Somerset, southwest England. EDF Energy and CGN have also agreed the Heads of Terms of a wider UK partnership which covers the development of two new reactors at Sizewell in Suffolk, and the licencing and possible construction of the Chinese ‘Hualong’ reactor design at Bradwell in Essex.

HPC will provide a major boost to European industry, generate reliable and affordable electricity for over 5 million homes and help avoid around 9 million tonnes of CO2 emissions per year during its 60 year operational lifetime. Similar nuclear investments, including Sizewell and Bradwell, will help provide the large and stable base-load low carbon electricity essential to the EU’s energy security, climate and competitiveness objectives for 2030 and 2050.
The 131 nuclear reactors currently operating in Europe generate almost 30 % of the EU’s total electricity and more than half its CO2-free electricity.

For further information on the agreement, please see the press release of EDF Energy. 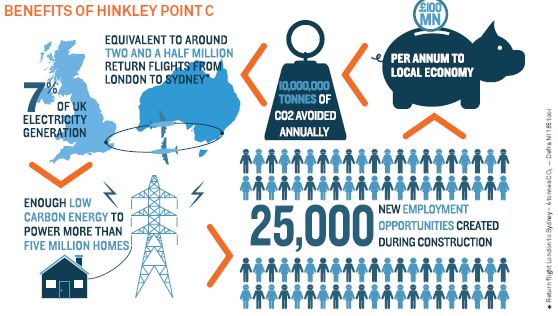