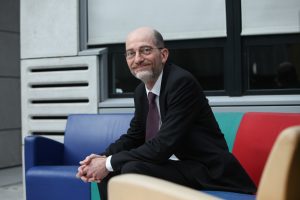 In December 2020, I had the honour of being appointed as Vice-President of FORATOM by the members of the Executive Board. I would like to thank them warmly. It is with great humility, considering these new functions, that I want to try to envisage what 2021 will look like.

Running this exercise is not easy as it is true that 2020 was an unpredictable year. Yet, as of today, there are several signs that fill me with hope, both in relation to the pandemic and the future of our industry. The implementation, across Europe and around the world, of ambitious vaccination campaigns is a key step in the process of eradicating the virus which has heavily impacted our society and damaged our economic life. However, controlling COVID 19 virus negative effects will require time, and we must not relax our efforts if we want the start of the recovery to occur by the end of 2021.

In 2021, nuclear could potentially be included in the Taxonomy

The same goes for the nuclear industry which, if not neglected by European policy makers, will undoubtedly be one of the pillars of this much awaited recovery. The inclusion of nuclear as an eligible sector under the EU sustainable finance is therefore key, and I hope this will occur in 2021. Such an inclusion would allow our industry to benefit from the financing conditions it needs in the years to come.

So far, we have not been successful on this front, but the recent decision to postpone the adoption of the first taxonomy DA opens a door. This postponement makes it possible to include nuclear in this first delegated act, on the basis of the elements contained in the draft report of the JRC (European Commission’s Joint Research Center).

As of today, the contents of this report, which will primarily focus assessing nuclear response against the “Do not significantly harm” criteria, is not known. The report is expected to be released in February and will then be reviewed by the Scientific Committee on Health and Environmental Emerging Risks (SHEER) of DG Sante and by the group of radioprotection experts under Article 31 of the EURATOM Treaty. By handling nuclear at the same time as other industries (and not in different stages as initially planned) is now possible. This gives nuclear the opportunity of being reintegrated into the general process that applies to other industries and thus contribute to the EU’s ambition of reaching net-zero emissions by 2050.

Another area of hope at the start of this year is an initiative due to be launched shortly by the Commission in support of the development of Small Modular Reactors (SMRs) in Europe.

SMRs are showing significant potential across the EU as a future low-carbon technology. They can provide dispatchable, low-carbon and abundant power generation. They will also enable the replacement of fossil fuels notably in district heating. They can also support the electrification of road and railway transport, hydrogen production and water desalination.

There is a need for an initiative by the Commission to organise a dialogue between various European stakeholders. In this context, it is important to support the Commission which is trying to set up an “industry roundtable on SMRs” as soon as possible to address issues such as regulatory requirements, financing tools, R&D challenges, public acceptance and industrial value chain consolidation.