GIFEN is driven by two convictions: the expertise of the French nuclear industry is a reference throughout the world and nuclear energy is essential in the fight against climate change 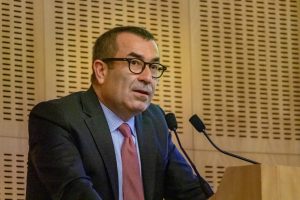 Since February 2019, GIFEN has been responsible for implementing the Nuclear Sector Deal signed on 28 January 2019 between the French government and the French Nuclear Strategic Committee (CSFN). This 4-year agreement (2019 – 2022) defines the mutual commitment between the French government and the nuclear industry to carry out the action plan that will guarantee the long-term competitiveness and capabilities of the French nuclear industry through four core principles and one transversal objective:

These four axes are underpinned by another collective action dedicated to accelerating the transformation of the French nuclear industry towards the industry of the future.

GIFEN defends a very clear position on the future of nuclear power in France and its key role in the European energy mix. Like the EU, GIFEN’s priority is to reduce the environmental impact from the energy sector by continuing to decarbonise the electricity mix, particularly in Europe, and by electrifying certain key sectors such as transport.

A fundamental part of the decarbonisation process will be to support and facilitate investments in all means of low-carbon electricity production. For nuclear power, this will concern both the safe life-extension of reactors and investment in new plants. In 2017, the European Commission estimated that an investment of between 400 and 450 billion Euros would be needed to maintain installed nuclear capacity at around 100GW in 2050 (compared to around 120GW today).

This requires a major effort. GIFEN believes wholeheartedly that the nuclear industry must therefore benefit, without discrimination, from the European support mechanism for the climate transition and investments in low-carbon technologies, as part of the “Green Deal”.

These goals are also aligned with the reindustrialisation of the European continent and the European Union has everything to gain by supporting an industry of the future. The nuclear industry already supports 1.1 million jobs and contributes to almost 3.5% of European GDP, making it the second largest industrial sector in the EU (after construction). The French industry is also a major player, supporting Europe’s position on the international stage, and equipping it with cutting-edge nuclear technological expertise.

Looking towards 2050, it is also crucial that the European Union strengthens its industrial strategy for low-carbon power technologies. Within a decarbonised electricity mix, security of supply will depend more on how the EU masters low-carbon technologies and their supply chains, ranging from access to critical raw materials to equipment manufacturing: Retaining and strengthening industrial and technology leadership is at the heart of the GIFEN strategy. It must also be at the core of the European project.

GIFEN, together with the other companies within the French nuclear industry, in alignment with France and the European Union, is committed to providing safe, competitive and sustainable nuclear electricity.