This article is by Polskie Elektrownie Jądrowe sp. z o.o. (PEJ), a state-owned SPV directly responsible for the development of the investment process and for site investigations, as well as for obtaining all the necessary licenses and permits required for the construction of the first Polish nuclear power plant. In March 2021, the State Treasury acquired the SPV from the PGE Capital Group and other minority shareholders.

In this edition of A View From, Polskie Elektrownie Jądrowe sp. z o.o. explain how the Lubiatowo-Kopalino site in the Choczewo commune was announced as the preferred site for the first Polish NPP. PEJ will now apply for the required administrative decisions for the future power plant site, including the environmental decision and the location decision. 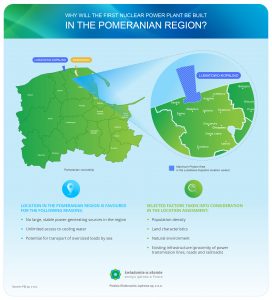 In December 2021 PEJ announced a coastal site named “Lubiatowo-Kopalino” in the Choczewo commune as the selected preferred site where the first Polish NPP is to be built. The surveys which preceded the choice of the preferred site were carried out since 2017 on a scale that was unprecedented in Poland. At the beginning of the site selection process, as many as 92 potential locations were considered. The analysis took into account factors such as characteristics of the terrain, availability of cooling water, location relative to areas subject to forms of nature conservation (including Natura 2000 sites), and elements of the infrastructure that either exist or can be further developed, such as power, road or railway networks.

The results of the analyses confirmed that the conditions for the construction of a nuclear power plant in the Pomorskie voivodeship are favourable. Upon limiting the potential sites to Pomerania, two of them – Żarnowiec and Lubiatowo-Kopalino – were subject to more detailed scrutiny of identical scope, the effects of which were published in the Environmental Impact Assessment Report. The analyses confirmed that the Lubiatowo-Kopalino site is the most environmentally favourable and safe for the population.

The selection of the preferred site does not entail the final consent to the implementation of the investment project. Polskie Elektrownie Jądrowe will now apply for the required administrative decisions for the future power plant site, including the environmental decision and the location decision.

Submission of the EIA Report for the first NPP in Poland

As part of this assessment, two site variants have been analysed, Variant 1 – the Lubiatowo-Kopalino site in the Choczewo commune, and Variant 2 – the Żarnowiec site in the Krokowa and Gniewino communes. Both were indicated and named as early as 2014, and subsequently analysed in terms of technical subvariants regarding the nuclear power plant cooling system based either on a once-through cooling system using seawater, or on cooling towers using seawater or desalinated seawater.

The final shape of the EIA Report fulfils the provisions of the Decision of the General Director for Environmental Protection (GDOŚ), issued in 2016, specifying the scope of environmental report with regard to the site variants and their technical subvariants considered, as well as to the nuclear power plant’s associated infrastructure. The Report will be made available by the authority in accordance with the principles set out in the Act on the provision of information on the environment and its protection, public participation in environmental protection and environmental impact assessments.

Along with the environmental report, PEJ Sp. z o. o. has submitted a complete set of documentation for the needs of transboundary environmental impact assessment.

In the beginning of April, PEJ started a series of meetings with local stakeholders from the site communes regarding the EIA Report.

Polskie Elektrownie Jądrowe (PEJ) sp. z o.o. is a company the responsibilities of which include preparing the investment process and acting as the Investor in the project involving the construction of nuclear power plants with a total installed capacity of approximately 6 to 9 GWe, based on safe, proven, large-scale, Generation III(+) pressurised water nuclear reactors, and their possible future operation. More information available at: www.ppej.pl.